Demant A/S is an internationally leading company in the field of modern hearing solutions. The company is owned by William Demant Holding A/S. Listed on the Nasdaq Copenhagen since 1995, the group develops and manufactures hearing aids, diagnostic instruments and audiometric equipment to aid personal communication. Find the latest WILLIAM DEMANT HOLDING A/S WILL (0RGT.IL) stock quote, history, news and other vital information to help you with your stock trading and investing. The key driver is still the.

'We've seen a very encouraging start to 2017, and I'm happy to see that all our business activities are in good shape and continue to launch new, innovative products. I'm very pleased to see the progress we've made, as it's our top priority to secure future growth through innovation and customer focus and to deliver on our hearing healthcare ambition,' says Søren Nielsen, President & CEO.

In the US, the unit growth rate was only 1-2% year-to-date, mainly driven by growth in the commercial market of 2%. In the same period, sales to VA was relatively flat.

We believe that year-to-date, the overall unit growth rate in Europe has also been below our expectations.

We therefore believe that the unit growth rate on the global market for hearing aids has year-to-date been below the Group's general assumption of 4-6%. We estimate that the ASP have been relatively stable in the global market supported by recently launched new products, slightly exceeding our expectations. Market growth measured in value is thus estimated to have been in line with our expectations.

Discussions are ongoing regarding the potential introduction of an over-the-counter (OTC) hearing aid category in the US. Under the right regulatory framework, we support the FDA's governing of a potential future OTC category, with FDA-regulated products to be used for mild hearing losses.

The Group's core business - the wholesale of hearing aids - has year-to-date generated strong organic growth, significantly exceeding the market growth rate, continuing the momentum from the second half of 2016. This growth was mainly driven by a high unit growth, but also by an increase in the ASP as a result of a better product mix. Oticon Opn still receives outstanding feedback in the marketplace and remains a main positive driver of organic growth.

Bernafon and Sonic are experiencing some ASP pressure, as their current product portfolios are at the late stages of their life cycle, but we expect to launch new products in the second half of 2017. The combined unit growth for Bernafon and Sonic has been strong year-to-date, especially for Sonic driven by distributor sales.

Year-to-date, growth has been broadly based in all major markets. Especially North America generated high organic growth both in the commercial market and with VA where we have seen increasing sales and have continued to gain market share. Sales to NHS also experienced high unit growth, but at a lower ASP.

At the annual US hearing aid convention, AudiologyNOW!, which took place in Indianapolis, Indiana, at the beginning of April, Oticon announced the further expansion of its OpenSound paradigm by presenting Oticon Opn in two new styles: A new miniRITE-T with telecoil and a new and powerful BTE for severe to profound hearing losses.

Also at AudiologyNOW!, we presented rechargeability as a flexible option for both new and existing Oticon Opn users. The rechargeable solution can be retrofitted to existing Oticon Opn products, and the user has the possibility to change between rechargeable and disposable batteries. Oticon Opn will thus be the first hearing aid that combines rechargeabillity and Made for iPhone, enabled by low-power 2.4 GHz radio technology. We also launched a new tinnitus solution as well as a new Speech Rescue feature that spans all styles and price points.

Our retail activities continue to deliver solid organic growth in addition to growth from acquisitions. Europe remains the main driver of organic growth year-to-date. Our US retail business has seen improved performance, however with the growth rate still being below the market growth rate.

We estimate that the overall market is showing satisfactory growth rates year-to-date, and we believe that Oticon Medical has succeeded in gaining market share due to the successful launch of the Ponto 3 bone-anchored sound processor and solid performance in the CI area.

Ponto 3 was off to a strong start and has continued its positive momentum. Ponto 3 has thus been a main growth driver for the bone-anchored hearing systems (BAHS) business year-to-date, with the strongest growth rates obtained in Europe. Especially the new and first ever abutment level SuperPower processor has created significant growth, which is a clear indication of how receptive this market is to innovation.

The CI business has rebounded to very solid growth levels. This development is, among other factors, due to improved market conditions in oil-dependent markets, which adversely affected growth in 2016. The roll-out of Neuro continues at a positive pace with launches in countries such as France and Brazil where we enjoy high market shares. Data on patients fitted with Neuro gathered by leading CI centres are excellent and clearly beyond what could be expected. In late 2017, we plan to initiate the second phase of the Neuro launch, which will focus on a very small and cosmetically attractive BTE platform and a new generation of fitting software.

Diagnostic Instruments has generated satisfactory growth rates year-to-date. Growth has been broadly based, with solid contributions to growth from the US, Asia and from some of the oil-dependent markets that negatively impacted growth in 2016.

Like the hearing aid business, Diagnostic Instruments also introduced new products at the AudiologyNow! convention. The new products consist of a new audiometer, Pello, from Grason-Stadler, a VNG system with an innovative touch interface from Interacoustics and a new tinnometer for diagnosing tinnitus from MedRx.

Year-to-date, sales and order intake in Sennheiser Communications, our joint venture with Sennheiser electronic GmbH & Co. KG, have developed satisfactorily. Especially the CC&O segment has delivered strong growth, and we are also seeing positive momentum in the Mobile segment where we have introduced new products. 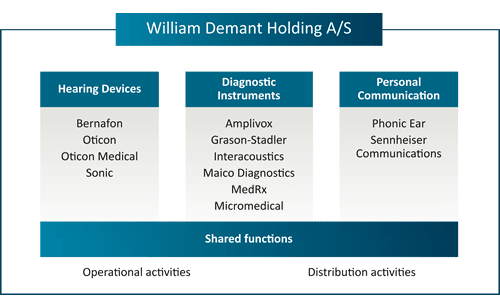 The Management changes announced in connection with publication of our Annual Report 2016 have now been implemented, and Søren Nielsen replaced Niels Jacobsen as President & CEO of William Demant Holding on 1 April 2017. After the annual general meeting on 27 March, Niels Jacobsen was elected Deputy Chairman of the Company's Board of Directors, and Niels B. Christiansen was elected new Chairman, replacing Lars Nørby Johansen.

Year-to-date, the Company has bought back shares worth DKK 308 million in total. The Company's portfolio of treasury shares corresponds to 0.75% of the share capital. This portfolio does not include the shares that were cancelled following the authorisation granted at the annual general meeting in March 2017.

We will continue to prioritise value-adding investment opportunities and acquisitions, and any additional cash will be spent on buying back shares. We aim at a target gearing multiple of 1.5-2.0 measured as net interest-bearing debt (NIBD) relative to EBITDA.

We maintain our 2017 outlook as stated in our Annual Report 2016, including our expectation to generate growth in sales in all the Group's three business activities: Hearing Devices, Hearing Implants and Diagnostic Instruments.

In 2017, we are guiding for an EBIT of DKK 2.2-2.5 billion before the announced restructuring costs of around DKK 200 million. With the strong start to the year, we consider it most likely that we will realise an EBIT in the upper half of the range.

The Demant Group was founded in 1904 by Hans Demant, under the name Oticon. After his death in 1910, his son William Demant took over.

Already before World War I, Oticon increased its sales volume to cover Scandinavia and Saint Petersburg. In the twenties and thirties, a network of agents was established in Europe.

During World War II, Oticon started its own production due to the scarcity of goods from other countries.

In 1995 the company was listed at the Copenhagen Stock Exchange.

In February 2017 it was announced that former President & CEO Niels Jacobsen would step down after 25 years in charge of the company. Instead he would become CEO of William Demant Invest A/S

Since 1 April 2017 the company is led by President & CEO, Søren Nielsen and board chairman Niels B. Christiansen. 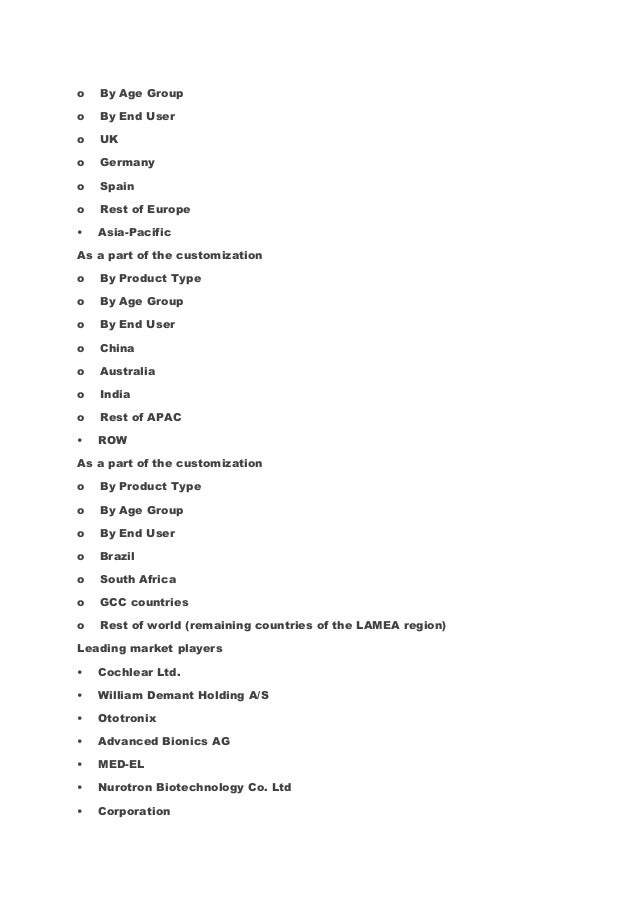